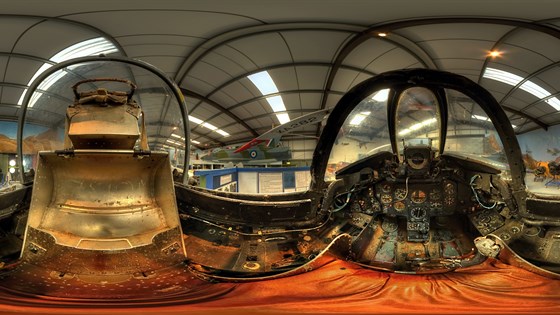 Bardolino - market day from the board walk

From inside a jet engine

Up the Watkins path in the morning

Oxford from the cupola of the Sheldonian

Cockpit of a de Havilland Vampire

Panoramic Image - Museum
Views: 2088
2013-12-08
← Scan Me
About Share Url Embed
Equipment: Pentax K5 with Falcon 8mm       Panorama software       Panoramic head
The Hawker Hunter F Mk. 1 was designed as a short-range single seat fighter and flew first in 1953. The Hunter WT694 served with No. 54 Sqn between March and October 1955 at RAF Odiham , Hampshire and was later used for formation aerobatics. It had a maximum speed of 610 knots (Mach 0.95 at 36000 feet) and was powered by one Rolls-Royce Avon RA7 with a thrust of 7500 lb.
I don't know which product should I choose.
I need to build a virtual tour. Which product should I use?
How can I print a panorama?
Can *.tiff images be used in Panoweaver?
How to embed Panoramas into webpage?
How to create HDR panoramas?
How to unwrap a single fisheye image?
What kinds of image formats that panowaversupport?
What kind of Raw files does Panoweaver support?
How can I get the full frame fisheye image compatible to Panoweaver?