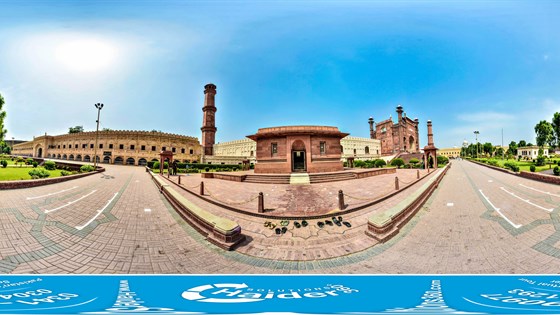 Panoramic Image - Others
Views: 1397
2014-11-08
← Scan Me
About Share Url Embed
Equipment: Panorama software       Panoramic head
The Tomb of Allama Muhammad Iqbal is a simple but impressive structure located in in Iqbal Park in Lahore, Punjab, Pakistan. Iqbal Park is one of the largest urban parks in Pakistan in the Hazuri Bagh lawn between the Badshahi Mosque and the Lahore Fort where both the grand structures (the Mosque and the Fort) face each other.[1] Official guard is maintained by Pakistan Rangers. The architecture reflects a combination of Afghan and Moorish styles and is entirely constructed of red sandstone. Thousands of visitors come to the mausoleum every day to pay their respects to the poet-philosopher. He was one of the major inspirations behind the Pakistan Movement, and is revered in Pakistan as Muffakir-e-Pakistan (The Thinker of Pakistan) or Shair-e-Mashriq (The Poet of the East).[4] Iqbal died on 21 April 1938 in Lahore at the age of 60. Since the independence of Pakistan, an academy named after him (Iqbal Academy) has been established to promote and disseminate his poetical and philosophical messages and teachings. As another tribute, the recently renovated Lahore airport has also been named after him as Allama Iqbal International Airport. This virtual was made by www.HaiderSolutions360.com in respect of Beloved Baba Allama Muhammad Iqbal for his excellent services for mankind in philosophy, and reconstruction of thoughts in order to achieve human excellence, & more. We salute him for his selfless devotion and services and we ask Allah to send peace & blessings upon him. Please send your peace greetings and wishes to beloved Baba Allama Iqbal R.A.
I don't know which product should I choose.
I need to build a virtual tour. Which product should I use?
How can I print a panorama?
Can *.tiff images be used in Panoweaver?
How to embed Panoramas into webpage?
How to create HDR panoramas?
How to unwrap a single fisheye image?
What kinds of image formats that panowaversupport?
What kind of Raw files does Panoweaver support?
How can I get the full frame fisheye image compatible to Panoweaver?