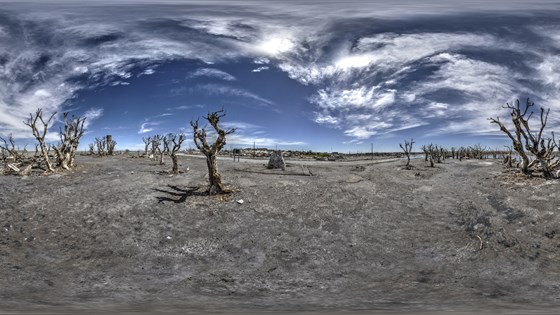 Panoramic Image - Natural Landscape
Views: 394
2015-03-02
← Scan Me
About Share Url Embed
Equipment: Nikon D5000 + Nikor 10.5       Panorama software       Panoramic head
Villa Epecuén was a tourist village that was located in the Buenos Aires Province, Argentina. Now abandoned, its ruins are found on the eastern shore of the Laguna Epecuén, about 7 kilometres (4.3 mi) north of the city of Carhué. Developed in the early 1920s, Epecuén was accessible from Buenos Aires by train. The Ferrocarril Sarmiento line served the Villa Epecuén station, while the Midland Railway and the Southern Railway carried passengers to nearby Carhué station.[2] Tourism was well developed in Epecuén, as vacationers from Buenos Aires would seek the therapeutic salty waters of Lago Epecuén. At its height, Villa Epecuén had the capacity to accommodate 5,000 visitors,[3] while unofficial accommodations allowed for 2000 more.[citation needed] On 6 November 1985, a seiche caused by a rare weather pattern broke a nearby dam first, then the dike protecting the town. Rapidly made uninhabitable, the town saw the waters rise progressively, reaching up to 10 metres (33 ft) at its maximum. The village was never rebuilt. At the time of the catastrophe, there were up to 280 businesses in Epecuén, including lodges, guesthouses, hotels, and businesses that 25,000 tourists visited between November and March, from the 1950s to the 1970s. The town reached a population of 1,500 inhabitants at its peak. The town now has a sole resident, Pablo Novak, who returned to his home when the waters receded after covering the town for 25 years.[1] Pablo's Villa, a 2013 documentary, chronicles the life of the town and of Pablo Novak. The town was used as the setting for an advertisement featuring the street trials cyclist Danny MacAskill released by Red Bull Media House on 27 May 2014.
I don't know which product should I choose.
I need to build a virtual tour. Which product should I use?
How can I print a panorama?
Can *.tiff images be used in Panoweaver?
How to embed Panoramas into webpage?
How to create HDR panoramas?
How to unwrap a single fisheye image?
What kinds of image formats that panowaversupport?
What kind of Raw files does Panoweaver support?
How can I get the full frame fisheye image compatible to Panoweaver?