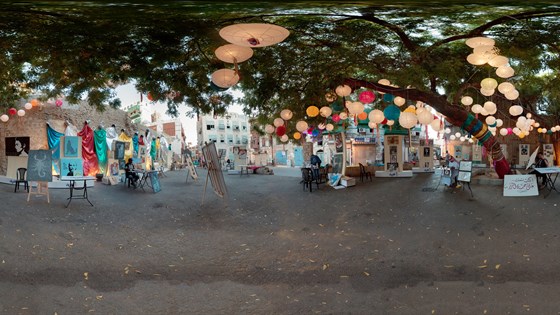 Panoramic Image - Natural Landscape
Views: 819
2017-03-31
← Scan Me
About Share Url Embed
Equipment: Panorama software       Panoramic head
Al-Balad is the historical area of Jeddah, the second largest city of Saudi Arabia. Balad can literally be translated as "The Town."[1] Balad is the historic center of the City of Jeddah.[2] Al-Balad was founded in the 7th century and historically served as the centre of Jeddah.[3] Al-Balad's defensive walls were torn down in the 1940s. In the 1970s and 1980s, when Jeddah began to become wealthier due to the oil boom, many Jeddawis moved north, away from Al-Balad,[4] as it reminded them of less prosperous times.[5] Al-Balad had insufficient parking space for large cars. Its stores did not sell expensive designer clothing. Poor immigrants moved in place of the Saudi population.[4] The municipality of Jeddah began historical preservation efforts in the 1970s. In 1991 the Municipality of Jeddah founded the Jeddah Historical Preservation Society to preserve the historical architecture and culture of Al-Balad. In 2002 $4 million United States dollars were earmarked for the preservation society.[5]In 2009 Al-Balad was nominated by Saudi Commission for Tourism and Antiquities to be listed in UNESCO's World Heritage site and it was accepted on 2014.[6] In order to preserve the old structures within the Balad, the Historical Area Preservation Department was established in 1990, hoping also to help promoting cultural tourism in the country.[citation needed] Many Jeddawis have moved away from Al-Balad by 2007; the streets of Balad were still packed with people during the month of Ramadan.[2] Around that year the Jeddah Urban Development Company was formed to restore Al-Balad.[7]
I don't know which product should I choose.
I need to build a virtual tour. Which product should I use?
How can I print a panorama?
Can *.tiff images be used in Panoweaver?
How to embed Panoramas into webpage?
How to create HDR panoramas?
How to unwrap a single fisheye image?
What kinds of image formats that panowaversupport?
What kind of Raw files does Panoweaver support?
How can I get the full frame fisheye image compatible to Panoweaver?