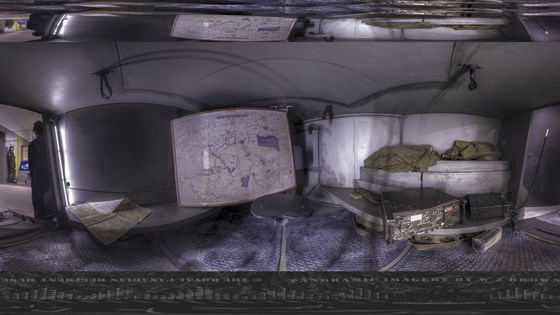 Panoramic Image - Museum
Views: 1122
2015-01-10
← Scan Me
About Share Url Embed
Equipment: Pentax K5, Pentax DA 10 - 17 fisheye, Nodal Ninja       Panorama software       Panoramic head
It was a challenge to stitch this panorama - it was missing an image (where the map joins on the left third). I also forgot to set the no parallax point on the camera head rail, so the shots were taken with the adjustment to far forward by about 5 mm. (You can see where that made a difference in how the light reflected off of the map on the left 1/4 of it.) As a result, in the two adjoining shots of the map frame, the frame itself was out of alignment by at least two inches. But I've learned enough so that with Panoweaver I was able to force it back together, even though joining the map frame opened a 2 or 3 inch "rip" in the map itself. (Since the rip was in the brighter of the two map images I just roughly cloned some map areas into the pano image, and it's kind of okay.) It would have been better to have enough shots, and to have the no parallax point set properly. Fisheye lens + Panoramic Head + Tripod.
I don't know which product should I choose.
I need to build a virtual tour. Which product should I use?
How can I print a panorama?
Can *.tiff images be used in Panoweaver?
How to embed Panoramas into webpage?
How to create HDR panoramas?
How to unwrap a single fisheye image?
What kinds of image formats that panowaversupport?
What kind of Raw files does Panoweaver support?
How can I get the full frame fisheye image compatible to Panoweaver?